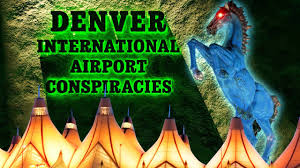 Over the last decade+ of researching and writing about what the globalists love to call 'conspiracy theories,' one of the more captivating topics out there is no 'conspiracy theory' at all but a 52.4 square mile monstrosity, bigger than the Island of Manhattan, the Denver International Airport.

The largest airport in North America by land, and the 2nd largest airport in the entire world, as Travel and Leisure reported of the airport back in February of 2020, the DIA is home to a slew of so-called 'bizarre conspiracy theories' though whether they are really just 'crazy theories' or 'theories cutting too close to the truth' is something we won't come to a clear-cut answer to within this story.

Long-rumored to be sitting on top of one of the biggest 'Deep Underground Military Bases' in the world, and the post-apocalypse home of America's 'continuity of government agencies' and the 'home of the new world order global government,' we have to take a look at the DIA once again with the home of the viral 'Doomsday Murals' and 'Horse of the Apocalypse' back in the news this month for National Preparedness Month.

With DenverReady giving away free bugout bags at a time when talk of nuclear war heats up around the world, the DIA, which opened back in 1995, has long been plagued with rumors and signs of massive underground bunkers beneath the monstrosity and while we think it's great that DenverReady is 'getting the folks of Denver ready,' as we're asked in the 1st video at the bottom of this story, 'ready for exactly WHAT?'  With part of that prepping consisting of the city of Denver preparing the locals there to 'bug out' of town, as we're asked in that video, what do they know that we don't know?

Explainer: Who will pay for climate 'loss and damage'?

Arizona Official Claims He Voted For Certification "Under Duress"

My Career as a White Police Officer

Tucker: It's hard to believe this is real