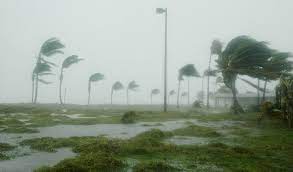 All that is about to change and with a bang: As the powerful Hurricane Ian bears down on Florida which is rapidly evacuating ahead of landfall, it threatens to further destabilize a homeowners-insurance market already teetering on the edge of disaster. The storm is expected to make landfall along the southwest Florida coast late Wednesday or early Thursday, and could send seawater coursing through the streets of Tampa.

While Ian's strength and trajectory are subject to change in the coming days, one early estimate pegs potential damage and economic losses in the Tampa Bay region at $50 billion to $70 billion, according Chuck Watson, a disaster modeler with Enki Research.

That price tag, according to Bloomberg citing data from the National Oceanic and Atmospheric Administration, would make Ian among the costliest storms in US history, as the top end of that range would rank Ian as the sixth-costliest US hurricane. Difficulties in getting needed material and supplies to victims due to snagged supply chains are likely to raise costs even further.

Some insurers will likely not survive: Ian is arriving in the wake of six insolvencies among insurers that write homeowner policies in the state. According to Bloomberg, the largest insurers largely pulled back from the market after taking a beating from natural disasters, and the smaller firms still active there have struggled to endure losses.

"It's kind of the worst timing for the storm, especially if it hits Tampa Bay," Logan McFaddin, vice president of state government relations for the American Property Casualty Insurance Association, said in an interview.

Global Government vs. the People

It Is Official–the DOJ Is Weaponized

IBMs 433 Qubit Quantum Processor and Beyond

Spreading the Light of Liberty

GOP snakes have fooled us for years – when will we learn?

The Next Secular Bear Market May Be Upon Us

Here's What We Know About the Beliefs of Elon Musk

How BlackRock Conquered the World -- Part 3: Aladdin's Genie and the Future of the World