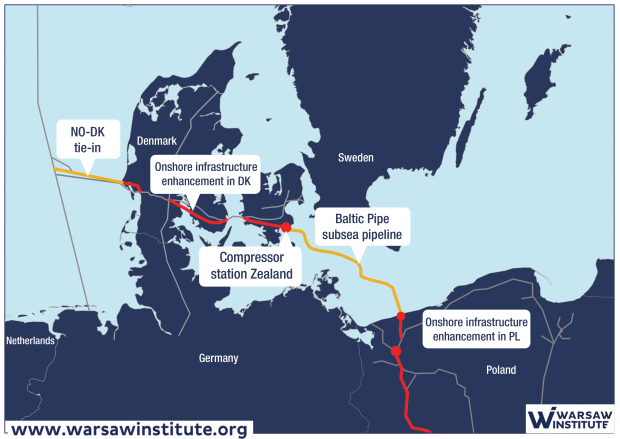 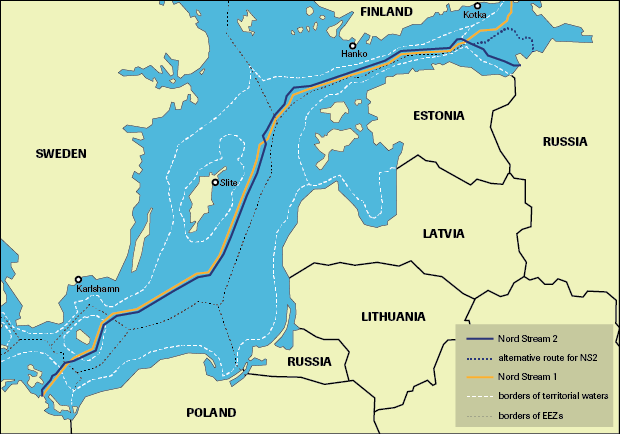 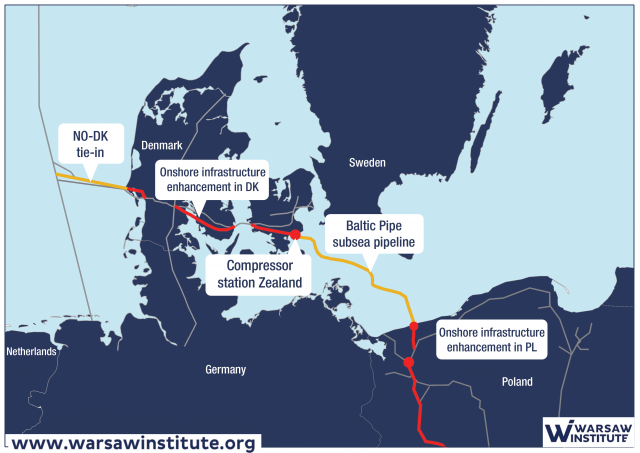 (P&GJ) — The $2 billion Baltic Pipe is scheduled to start flowing Norwegian natural gas to Poland on Sept. 27, a government official said, marking a key step in Europe's drive toward energy independence from Russia. 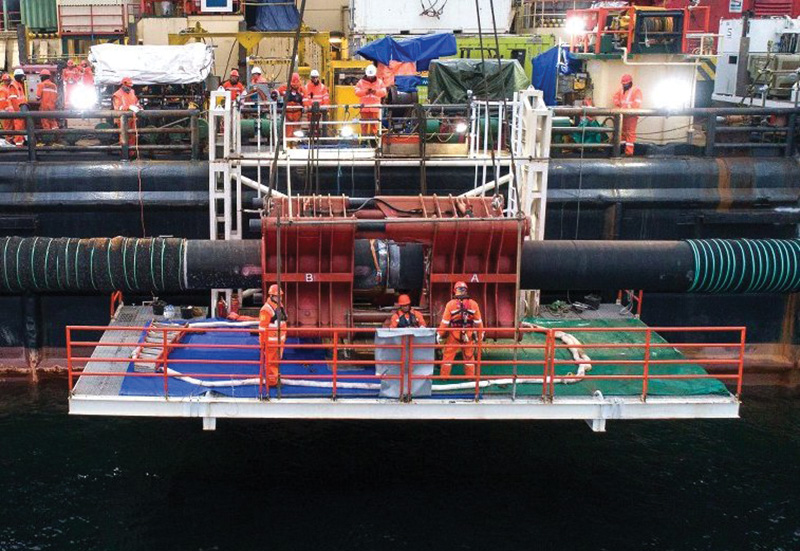 Workers complete the final weld of offshore construction of the Baltic Pipe between Denmark and Poland. (photo: Saipem)

Poland's deputy infrastructure minister, Marek Grobarczyk, wrote on Twitter that work is continuing on the 560-mile (900-km) Baltic Pipe's compressor stations. He initially wrote that the project will be completed on Sept. 29, then he updated the date in a posting later the same day.

"The good news is that Baltic Pipe will be ready in the near future. But the better news is that [it will be] even two days faster than I presented it this morning," Grobarczyk wrote.

"Work is underway to prepare, above all, the compressor stations, which are to deliver nearly 10 billion cubic meters [353 billion cubic feet of] gas," he wrote. "Together with LNG [liquefied natural gas] in ?winouj?cie and own extraction, it gives 100% energy security" for Poland.

The ?winouj?cie LNG terminal, operated by a unit of Gaz-System, opened in late 2015 with a regasification capacity of 177 Bcf/a (5 billion cubic meters per annum [Bcm/a]). It will have a capacity of 247 Bcf/a (7.5 Bcm/a) after completion of an ongoing expansion next year, enough to satisfy roughly half of Poland's natural gas demand.

The Baltic Pipe is expected to flow at a rate of about 71 to 106 Bcf/a (2 to 3 Bcm/a) during its startup phase before increasing to 10 Bcm/d, Grobarczyk said.

Poland's Gaz-System and Denmark's Energinet, partners in the Baltic Pipe project, announced on July 22 that the last welds of the offshore pipeline were made to connect the Danish transmission network in Faxe to the Polish transmission system in Pogorzelica.

"Today we can confirm that the undersea section of the Baltic Pipe has become, in technical terms, an element of the domestic transmission system," Gaz-System President Tomasz Stepien said in the announcement. "Thanks to the investment, we have integrated the Polish and Danish gas networks, creating a new corridor for natural gas supplies to Central and Eastern Europe."

Guaranteed welds, the so-called "golden welds" made at both ends of the offshore pipeline on opposite sides of the Baltic Sea, resulted in the physical connection of the Baltic Pipe with the national transmission network of Poland and the transmission infrastructure of Denmark, providing the possibility of gas transmission between the two countries.

Those steps are being followed by restoration activities at both construction sites, as well as commissioning work for the entire Baltic Pipe offshore gas pipeline system. 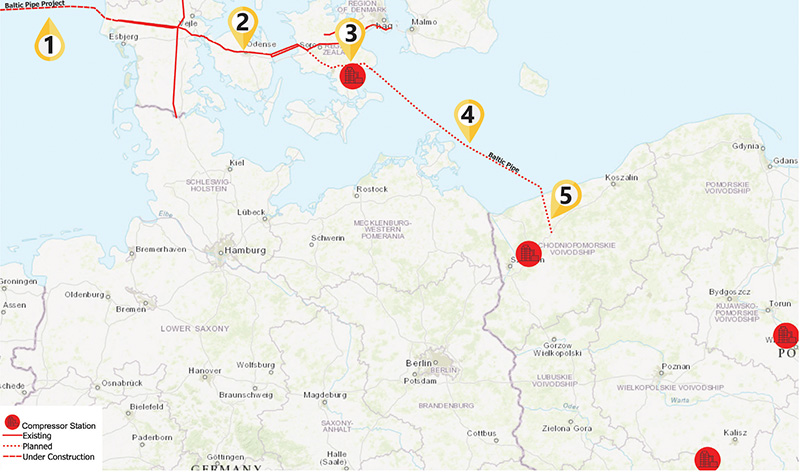 The Baltic Pipe project is one of the largest infrastructure investments in Poland. The European Commission has granted the investment the "Project of Common Interest" status. It received financial support from the European Union under the Connecting Europe Facility (CEF).

The Baltic Pipe will carry natural gas from the Norwegian North Sea to the Danish, Polish and Eastern European gas markets. The pipeline will be connected to the Polish Baltic Sea LNG import terminal of ?winouj?cie, eventually enabling LNG exports to Denmark and Sweden.

The Baltic Pipe was constructed in five stages:

The new North Sea Pipeline connects to the Danish transmission grid through a tie-in with Europipe II, which carries Norwegian gas to Germany. Energinet was responsible for planning and constructing the North Sea 800-mm pipeline and will operate it at pressures ranging between 8.5 megapascal pressure units (MPa) and 11 MPa.

This section involved upgrading the existing Danish onshore pipeline grid and constructing a 143-mile (230-km) pipeline linking Blåbjerg on the West Coast with the southeastern part of the country on the island of Zealand, which faces the Baltic. Energinet, the owner, planned, constructed and will operate this section.

The compressor station, co-financed by Gaz-System, was built on a 20-acre site at Faxe South on the island of Zealand and is the start of the Baltic Sea section of the project.

This section, the Baltic Sea subsea pipeline, will operate at a pressure range between 6.7 MPa and 12 MPa and connect Faxe South in Denmark to Niechorze-Pogorzelica in Poland.

It takes a longer route via the Swedish economic area rather than the more direct route via the German exclusive economic zone. Gaz-System, the owner, was responsible for design and construction and will operate the pipeline.

In Poland, where it makes landfall near the ?winouj?cie LNG terminal, a new onshore pipeline will link the Baltic coast at Niechorze-Pogorzelica with Lwówek to connect with the Polish branch of the Jamal gas pipeline. A new compressor station was also built at Goleniów.