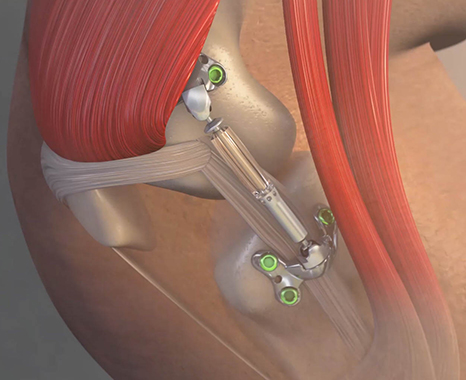 The recently trialled Misha Knee System is intended to help fill the gap between those extremes, by acting as an implanted shock absorber.

Manufactured by California-based company Moximed, the Misha device looks not unlike a miniature version of the type of shock you might see on a car. Anchored to the inner sides of the femur and tibia bones alongside the knee joint, it incorporates a steel piston on top, which slides in and out of a flexible polymer cylinder on the bottom.

When the piston compresses the cylinder on the downstroke, the cylinder responds by bulging outward along the sides, absorbing much of the energy that would otherwise go into the joint. As a result, the implant is claimed to reduce peak forces on the knee by over 30% with every step.

According to Moximed, the Misha is implanted under the skin via a single incision, in an outpatient procedure. Once the device is in place, it doesn't place any restrictions on the knee's range of motion or weight-bearing capabilities. It also leaves the bones, tendons and the cartilage intact, so future alternative treatments are still possible.

Back in 2019 – when it was known as the Calypso – the Misha was implanted on a total of 81 knee pain patients, as part of a multi-center clinical trial led by The Ohio State University Wexner Medical Center. The results of that trial were announced this Thursday (Sept. 22nd), after the test subjects had lived with the implant for three years.

According to Ohio State, over 90% of the participants experienced a "significant reduction in pain scores and improvement in function scores." Overall, the device had an 86% success rate, which is claimed to be better than the success rate for a commonly performed surgical procedure known as a high tibial osteotomy – it involves realigning the knee joint by cutting a wedge of bone out of the tibia.

Flu Vaccine Research Study - Payment up to $2,550 varies by study