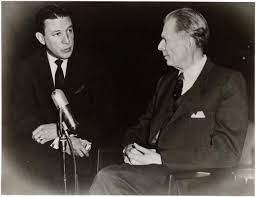 Huxley on the 'enemies of our freedom'.

Great interview by Wallace. His son is sub-optimal relative to him. FOX was right to fire him but FOX too should be fired over the lies it shilled during the pandemic e.g. pushing the fraud dangerous COVID gene injections.

WALLACE: This is Aldous Huxley, a man haunted by a vision of hell on earth. A searing social critic, Mr. Huxley 27 years ago, wrote Brave New World, a novel that predicted that some day the entire world would live under a frightful dictatorship. Today Mr. Huxley says that his fictional world of horror is probably just around the corner for all of us. We'll find out why, in a moment.

WALLACE: Good evening, I'm Mike Wallace. Tonight's guest, Aldous Huxley, is a man of letters, as disturbing as he is distinguished. Born in England, now a resident of California, Mr. Huxley has written some of the most electric novels and social criticism of this century.

Is 'Our Democracy' Failing Our Country?

The Ultimate David Icke Interview Must See! Humanity Will Win!

Are We Falling As Rome Did?

US Coal Prices Soar Above $200 Amid Energy Crunch

OPEC Is Taking On The Fed... And Goldman Is Buying Every Barrel It Can Find

Hunter Biden Probe To Look Into 'What Happened In 2020': Jim Jordan