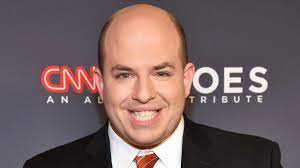 In a statement to NPR, Stelter said he's grateful to the network, and the staff who worked with him covering "the media, truth and the stories that shape our world."

"It was a rare privilege to lead a weekly show focused on the press at a time when it has never been more consequential," said Stelter, who will elaborate on Sunday's show - its final episode.

Stelter got his start blogging about cable news as a student and went on to become a media reporter for The New York Times. Reliable Sources is the longest-running show on CNN; Stelter has hosted it for the past nine years and celebrated its 30th anniversary in March.

CNN chief Chris Licht informed Stelter of the decision yesterday. Licht has been making cuts throughout the network since taking the helm as part of Warner Bros. Discovery's takeover of the old Time Warner company. Stelter, who often touted the show's ratings on Twitter, was among those CNN hosts targeted for frequent criticism from conservatives for his coverage of the media in the Trump years. -NPR