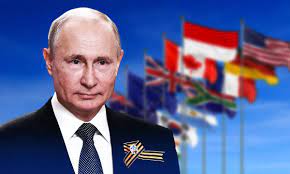 The western world is about to stop waging some bizarro war against Vladimir Putin that has sparked loathed energy hyperinflation across most of Europe, and is about to embrace the Russian leader, behind closed doors of course, even if it means a terribly vexxed Zelenskyy and US deep state.

Why? Because "pariah" Vladimir Putin is about to re-emerge on the G20 scene again, this time courtesy of Indonesian President Joko Widodo, who today said that both Putin and China's president Xi both plan to attend the G20 summit in the resort island of Bali later this year.

"Xi Jinping will come. President Putin has also told me he will come," Jokowi, as the president is known, said in an interview with Bloomberg News Editor-in-Chief John Micklethwait on Thursday. It was the first time the leader of the world's fourth-most populous nation confirmed both of them were planning to show up at the November summit, according to Bloomberg.

Needless to say, the presence of Xi and Putin at the meeting will set up a showdown with the deep state handlers who control Joe Biden's teleprompter and other, less senile "western" leaders, all of whom are set to meet in person for the first time since Russia's invasion of Ukraine. The attack has left the G-20 divided over whether to place sanctions on Russia, because while a handful of G-20 countries are relatively self reliant, most are desperate for Russia's commodity exports, whose lack has sent European energy prices to... well, just look for yourselves.

No More Down by the River?

5 Most Common Types of RV Toilets You NEED to Know

New COVID Plandemic Documentary Exposes the Truth About Ivermectin and the Scandal...

The Fed Is Aiding the Democrat's Coup