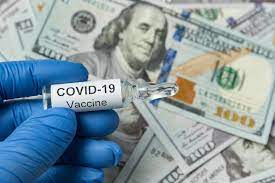 A group of nearly 500 healthcare workers is slated to receive a $10 million payout in a first-of-its-kind settlement challenging their hospital's COVID-19 vaccine mandate.

The coalition of workers at NorthShore University HealthSystem in Illinois filed their suit in October 2021, alleging the healthcare facility was illegally refusing to grant religious exemptions to the mandate. The July 29 settlement agreement by the state's Northern District Court means 473 current and former healthcare workers are soon to receive compensation for being denied religious exemptions from the healthcare system's vaccine requirement.

Liberty Counsel, the legal group representing 13 plaintiffs, said the settlement should "serve as a strong warning to employers across the nation that they cannot refuse to accommodate those with sincere religious objections to forced vaccination mandates," according to a statement from Horatio Mihet, vice president of legal affairs at the group.

Anyone who lost a job due to their inability to comply with the mandate is eligible to receive $25,000, and any of the 13 plaintiffs involved in the suit are eligible for an additional $20,000, meaning they would receive $45,000 in total, said Mat Staver, founder and chairman of Liberty Counsel.

Workers who eventually received the vaccine despite raising religious objections would be eligible for around $3,000 in compensation. Final payouts will be dependent on how many workers apply for the money. Additionally, anyone who was fired because of their refusal to get vaccinated based on sincerely held religious beliefs will be eligible for reemployment by the healthcare system.

What's Causing All Those Excess Deaths?

Are They Planning To 'Vaccinate' the Masses Against Our Will?

Bombshell: Dr. Judy Mikovits Exposes The Vaccine Depopulation Agenda And What Comes Next

Trudeau Capitulates: Canada to Drop Vaccine Mandate at its Border

Lifelong Immunity - Why Vets Are Pushing Back

Pfizer Continues to Use Babies and Children as Lab Rats to Develop More COVID-19 Vaccines...