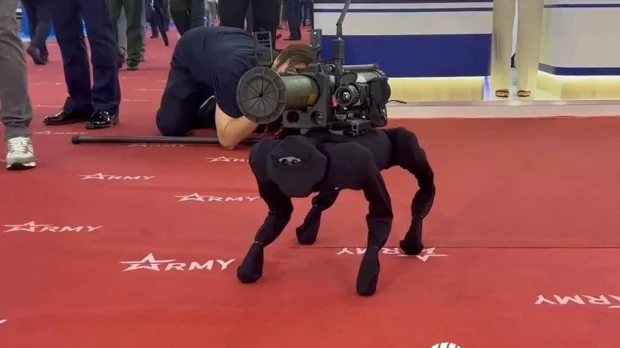 The robotic arms race is in full swing. This robotic dog is equipped with an RPG launcher and is "dressed" like a Ninja. This follows models equipped with high-powered rifles and machine guns. Since Russia and China are producing weaponized robots, there is no reason the think the US isn't doing the same. — Technocracy News & Trends Editor Patrick Wood

By: Matthew Gault via Vice

At a Russian arms fair this week, a developer showed off their new creation, and the logical next step of the robot arms race: a Boston Dynamics-style dog robot with an RPG strapped to its back.

A video uploaded by RIA Novosti, a Russian-state owned news agency, shows the robot in action, in which the robot tiptoes around before laying down on the ground, its RPG pointed forward. The robot itself is dressed in something akin to the black outfit of a ninja, its eyes, which are presumably cameras, peeking out.

RIA Novosti said it spoke to the developers and wrote in a Telegram post that they said "this is a sample of the M-81 robotic system, capable of conducting aimed shooting and transporting weapons, and for civilian purposes it can be used in the emergency zone for reconnaissance, passage through rubble and delivery of medicines."

Tesla Reveals Optimus, a Walking Humanoid Robot You Could Buy in 2027

Human Cyborgs are Just the Beginning.

Synthetic Salvation: On Genomics, Mind Uploads, and the Quest for Immortality

Bank Of England Capitulates: Restarts QE Due To "Significant Dysfunction" In Bond Market,

Behind The BOE's Panic: Billions In Margin Calls "Death Spiraling"

MIT Just Created Living Plants That Glow Like A Lamp, And Could Grow Glowing Trees...

Bank of England "Pivots"? Is The Fed Next?

What You Need to Know to Start a Fall Garden