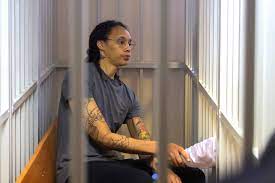 Michael Jordan, considered by many the greatest NBA player of all time, was cut from his freshman high school team. He benefited from adversity in his life.

"I've missed more than 9,000 shots in my career. I've lost almost 300 games; 26 times I've been trusted to take the game-winning shot and missed. I failed over and over and over again in my life. And that is why I succeeded."

Brittney Griner, American basketball star, was sentenced to nine years in prison for her failure to honor Russia's drug laws. I am encouraging Christians everywhere to not forget about her but intercede for her in her incarceration.

Recently I did a video on her situation and if you missed it, please consider reading this article to understand the complexities of her situation and empathize with her dilemma while praying that God uses it to turn her life around.

What happened
In February, Griner was arrested in Russia for carrying marijuana cartridges into a nation that will not tolerate recreational drugs. She was caught "red-handed," detained for months, pleaded guilty and was sentenced to nine years in prison.

Many Americans don't like the Russian criminal justice system and have put pressure on Biden to do something to get her out. Secretary of State Antony Blinken made an offer publicly to exchange prisoners to secure her release. Her sympathizers applaud the "progressive" maneuver and say, "Let's get on with it, it should be a done deal!"

This Is A F*cking JOKE

An Overview of US Nuclear Weapons and Arms Expenditure

What If They Threw a Pandemic & Nobody Came?

The Covid Rabbit Hole: An Inside Look at the Virus's Origin

Surprise! Another Month = Another Failed Attempt at QT