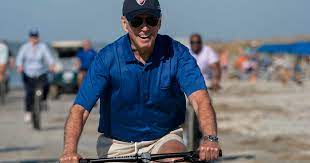 According to Federal Aviation Administration (FAA) data cited by the Associated Press, Biden plans to be in Wilmington, Delaware, from Tuesday until Friday after he leaves Kiawah Island.

The White House has not released a schedule of the president's vacation but announced that Biden will return to Washington, DC, on Tuesday to sign the so-called "Inflation Reduction Act of 2022" before leaving again. The $430 billion bill raises taxes to spend more on government-controlled health care and subsidizes green energy.

The White House plans a separate celebration of the bill signing in September with members of Congress.

The president has enjoyed a relaxed August after spending two weeks in quarantine during his long battle with the coronavirus.

He spent a weekend at his beach home in Delaware before working for two and half days at the White House and leaving for his week in Kiawah Island.

Biden was spotted Sunday riding his bike cautiously on the beach with Secret Service but refused to answer any questions from the press.

He has not answered any questions from reporters since the FBI's controversial raid on former President Donald Trump.

Ed Snowden: America's Open Wound - The CIA Is Not Your Friend