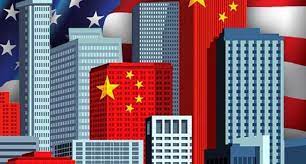 The average home purchased by Chinese buyers was worth just over $1 million — the most expensive average among foreign purchases and up from China's $710,000 average the year before. The report said buyers from China bought heavily in expensive states, with 31% of their purchases in California and 10% in New York. The Chinese purchases also included 7% in Indiana, 7% Florida, 5% Oklahoma, 5% Missouri, 5% Arizona, and smaller percentages elsewhere.

Purchasers from China made up 6% of all foreign buyers, as compared to Canadians making up 11%, Mexicans 8%, Indians 5%, and Brazilians 3%.

The new report said that 58% of Chinese buyers made all-cash purchases — the highest aside from 69% of Canadian purchases and 65% of Colombian ones.

Why are Chinese police operating in Canada, while our own government and security services

Why is China setting up unofficial "police stations" in foreign countries, including Engla

Why China's economy is worse than you think (the three "Ds")

This Is A F*cking JOKE

An Overview of US Nuclear Weapons and Arms Expenditure

What If They Threw a Pandemic & Nobody Came?