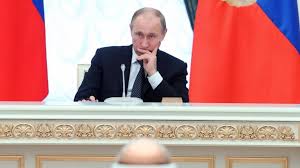 The West has done everything possible to prevent Russia from servicing her debt, and Russia has done everything possible to turn its money over to the same West that has stolen $300 billion of Russia's foreign reserves and is pummeling Russia with sanctions, blockades of one part of Russia to another, of massive insults, designating the Russian President Putin as a war criminal that must be tried in an international tribunal, and now a Finnish mayor  on Russia's border is advocating a NATO military base in his town even though NATO Secretary General Jens Stoltenberg said that nuclear weapons might be deployed in Finland and Sweden.  https://sputniknews.com/20220703/finland-mayor-mulls-placing-nato-base-directly-on-russian-border-1096913804.html

One would think that if the Kremlin insisted on servicing Russia's small foreign debt, the Kremlin would at least pay the interest out of its stolen foreign reserves, thus setting its creditors against the sanctions.

A clued-in government would simply say to the West, "thank you very much for repudiating our debt for us."

Europe has made it publicly clear that it intends to be 100% independent of Russian oil and gas within 3 years, and in the meantime intends to cap the price of Russian oil at half its current price.  So why is the Kremlin continuing to supply Europe with energy, without which European industry simply must close down, when Europe intends to punish Russia by spurning her energy while cutting its price?  Has it not yet occurred to the Kremlin that it is the energy that the Kremlin is  supplying to Europe that is making it possible for Europe to flood Ukraine with weapons?  The Kremlin's policy seems designed to demoralize Russia's armed forces.

Why Are Russian Spy Planes Probing Close to Alaskan Airspace?

China to send troops to Russia for 'Vostok' exercise

Reinventing Reality on All Things Russia and Ukraine

Are Russian/US Relations Ruptured Beyond Repair?