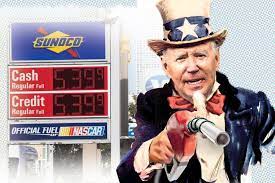 The comments were made by Biden advisor Brian Deese during a CNN interview when he was asked about the cost of living crisis.

"What do you say to those families that say, listen, we can't afford to pay $4.85 a gallon for months, if not years?" the host asked Deese.

"This is about the future of the Liberal World Order and we have to stand firm," Deese responded.

BIDEN ADVISOR BRIAN DEESE: "This is about the future of the Liberal World Order and we have to stand firm." pic.twitter.com/LWilWSo72S

Countless Americans couldn't care less about preserving the "liberal world order" in support of Ukraine, and would undoubtedly rather put America first.

Indeed, polls have shown that whenever they're told the consequences of 'supporting Ukraine', appetite for American involvement plummets.

But that's not the view of the president, who also said yesterday that Americans should suffer pain at the pump for "as long as it takes" because 'Putin bad man'.

????: NY Times' Jim Tankersley asks Biden, "How long is it fair to expect American drivers to pay that premium" for the war in Ukraine?

Biden once again blamed "Russia, Russia, Russia" for high gas prices, despite inflation already soaring before the war in Ukraine and his sanctions exacerbating the crisis.