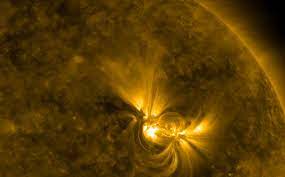 "We don't have many satellites flying in situ providing information."

Space weather forecasters are developing models that would help satellite operators prepare for bad space weather. But they have a problem: a lack of measurements at altitudes where Earth's atmosphere meets outer space. SpaceX is now stepping in to help fill the gaps after its firsthand experience with an unexpected solar storm earlier this year.

In February 2022, 40 brand-new Starlink satellites plummeted to Earth when they encountered a bout of bad space weather right after launch. The solar storm that caused their demise wasn't even a bad one, Tzu-Wei Fang, a space scientist at the U.S. National Oceanic and Atmospheric Administration (NOAA), told Space.com.

Yet the incident was a taste of things to come, as the sun, after a prolonged quiet period, is waking up to a more powerful cycle of activity than many satellite operators, including SpaceX, have experienced.

Because orbits near Earth have gotten crowded since the last time the sun was really vicious, good space weather forecasts are becoming especially important. Last year, NOAA launched what it calls the Whole Atmosphere Model, which extends the meteorological model that predicts weather on Earth to an altitude of up to 370 miles (600 kilometers). This region includes the second-highest layer of Earth's atmosphere, the thermosphere, where thin, diffuse gases cause drag that slows satellites down.

This thin gas high above Earth's surface changes density when solar weather hits, and these density changes cause problems such as those the Starlink satellites experienced in February.