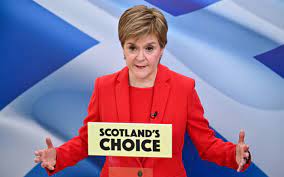 Sturgeon is now the longest-serving first minister in Scottish history and has led the pro-independence Scottish National Party since 2014. She made the announcement as the Scottish Government published the "Scottish Independence Referendum Bill," which will be sent to the nation's Supreme Court to seek clarity on whether or not the Scottish Parliament has the power to legislate such a referendum.

The court, based in Edinburgh, will then determine whether or not the bill meets the constitutional requirements.

Scotland last voted for its independence in 2014, when the "Yes Scotland" campaign lost its quest for independence by 55-45 percent. However, things have changed since that referendum due to the U.K. voting to leave the European Union in 2016.

Still, polls conducted this year showed similar results to the 2014 election, despite many Scots angered by Prime Minister Boris Johnson's handling of the COVID-19 pandemic.

Sturgeon is planning to write Johnson for permission to hold a consultative referendum ahead of the planned October 2023 vote, stressing that it is vital the vote was legal and that the issue would be referred to the U.K. Supreme Court.

Ep. 2847a - The [CB]/[JB] Attempt To Save The Collapsing Economic Narrative Has Failed

The IRS Goes Away Under NESARA Law

FBI Had Mole Inside Mar-A-Lago: Report

Northern Mexico Runs Out Of Water, May Impact Beer Production

The Smartphone's Role In Dumbing-Down America

Army Wants "tech that can support and integrate --

Media Claims Armed Protesters About To Descend On Mar-a-Lago, People Suspect It Will Be Feds