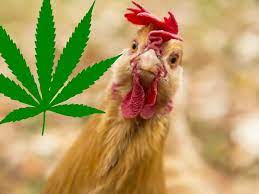 Chickens could end up being the major beneficiary of the relaxation, as scientists in Chiang Mai have begun testing to see if cannabis could replace antibiotics in commercial farming.

Their findings, which have not yet been published, are that cannabis-supplemented chickens on an organic chicken farm suffered from fewer cases of avian bronchitis, and the quality of meat was judged to be superior, based on the amino acid and lipid profiles, as well as its tenderness, compared with non-supplemented chickens.

It all started when Ong-ard Panyachatiraksa, a farm owner in the north of the country licensed to grow medical cannabis, was trying to brainstorm what to do with all the extra leaves from the cannabis plants. He started giving them to his chicken brood, and then invited scientists to have a look.

Mass-use of antibiotics in commercial chicken production, is, just like in hospitals and schools, leading to the rise in antibiotic-resistant pathogens. The cannabis would offer a different avenue of biological support, without contributing to the already rampant problem.

Here Is Why 37 Percent Of U.S. Farmers In The Western Half Of The Country...

Joel Salatin on the Potential of Backyard Agriculture

A Key Food to Grow With Limited Space

Raised Garden Beds Are So Yesterday!

Here's How Hydroponics Can Help You Save Money on Food

STOP The Insanity! What Am I Doing To My Strawberries?

How to Butcher a Bison | ENTIRE BREAKDOWN | The Bearded Butchers!

Does dew provide water to plants?