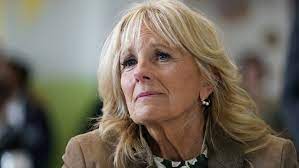 Jill and her daughter Ashley Biden were on the list of Americans barred from entering Russia.

Senators Susan Collins, Chuck Grassley, Mitch McConnell and others were also on the list.

Russia on Tuesday announced additional sanctions against 25 Americans that bar them from entering the country, targeting first lady Jill Biden and her daughter, among others.

The sanctions are aimed at individuals accused of "shaping the Russiaphobic" policies of the United States, according to the Russian foreign ministry. In addition to the Bidens, Senate Minority Leader Mitch McConnell (R-Ky.), Sens. Susan Collins (R-Maine), Kirsten Gillibrand (D-N.Y.), Ben Sasse (R-Neb.) and Chuck Grassley (R-Iowa) were also listed.

"I have no reaction to that other than it just goes to show you that the Russian capacity for these kinds of cynical moves is basically bottomless, so it probably shouldn't come as a surprise to any of us that they would do something like this," White House national security adviser Jake Sullivan told reporters aboard Air Force One.

In March the UK, US and EU expanded economic and personal sanctions on Russian goods and "key oligarchs."