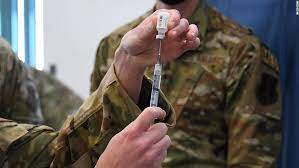 The Air Force is trying to boot out of its ranks an officer who has religious objections to the experimental COVID-19 shots, but is avoiding a court-martial procedure for fear of what it could reveal.

That would be that the military service's demand that all submit to the vax agenda is actually not a "lawful" order.

Which would be a huge "embarrassment."

It is Just the News that is reporting on the case involving Air Force Master Sgt. Vincent White, a Christian who requested a religious accommodation so that he would not be forced to take the abortion-linked COVID jab.

A court-martial now has been taken off the table, the report said, but he still could be facing an administrative separation board.

"It'd be a significant embarrassment and a huge blow to the Air Force to have a judge rule" that the shot requirement is "not a lawful order," he said.

White's first request for an accommodation was rejected, but still he refused to take the shot.

He was then given an "Article 15" non-judicial punishment.

Under that resolution he could lose pay or rank and be given extra duty. But the rules also allow him to reject that, and insist on a court-martial.

That's what White did.

yup our current leaders are all cowards when faced with true justice they back down and go back to their dirty tricks. The shots we took were experimental. Therefore should not be mandatory. If they force this on people how are they any better than what the Nazi's were convicted of?

Mega-donor dumped Democrats because of lies about vaccine

Dr. Robert Malone: 'We Have Got to Pay Attention to This Hot Mess'

Is the Untested and Dangerous Monkeypox Vaccine About to get an EUA to Avoid Legal...