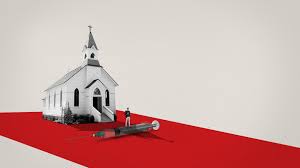 No longer is Jesus Christ the source of one's salvation in Mystery Babylon, but rather the Operation Warp Speed injections from Donald Trump and Tony Fauci, in other words.

According to reports, the Canadian government is offering either $100,000 to each non-profit religious grifting operation that agrees to promote "vaccine confidence" from the pulpit.

One pastor from Saskatchewan told his congregation that he received a letter about all this, which he apparently shredded. He claims the government is "joining forces with non-profit(s)" to twist the arms of all remaining vaccine holdouts to get them to comply with the agenda.

"We have a Christian school in our church, and I got this from public health, and it is quite an amazing thing," said Paul Dubois of Northeast Christian Fellowship in Melfort before his tithers.

"I'm not throwing my mail out anymore because we got asked to support vaccine confidence as a church with a non-profit, and the government was going to give us $50,000 for it."

Apparently, $50,000 is given as a baseline, followed by another $50,000 if the jabs are promoted "out of a non-profit," which churches technically are.

"They want us to promote vaccine confidence in schools," Dubois added, stating that the rhetoric used was to "help reduce vaccine anxiety in school."

"It's on the downtake right now," he added. "Kids aren't getting as much as they were."

Calling the whole thing "propaganda," Dubois made headlines back in January after he posted lettering on his church's sign that read, "All welcome, vaxed or unvaxed. No segregation."