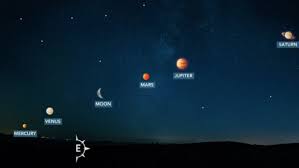 Mercury, Venus, Mars, Jupiter and Saturn have lined up in a rare alignment that won't occur again until 2040, according to AccuWeather.

While it is common to view a couple of planets together at any given time, the alignment of five planets simultaneously is a rare phenomenon which last occurred in 1864 and won't occur again for almost 20 years.

The alignment is best viewed in the early morning around an hour before sunrise and will remain as is until the end of June.

While a telescope is not essential to view the alignment, some of the planets may be hard to spot with the naked eye – like Mercury which is not clearly visible because of its proximity to the sun and may be harder to spot because it is situated lower in the horizon.

According to AccuWeather, the easiest planets to spot will be Mars, Jupiter and Saturn because they were higher in the sky and will therefore not be impeded by trees and buildings.

While Uranus and Neptune will not be visible to the naked eye, binoculars or a telescope and sky charts will reveal the other two planets in the solar system.

According to Space.com, on the mornings of Thursday to Saturday, June 23-25, the waning crescent moon will be located between Mars and Venus, making identifying the planets easier even for people who are not well-versed in astronomy.