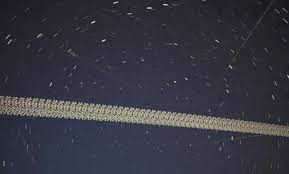 Spacex President and COO Gwynn Shotwell talked about a target of one Starship rocket every day. This means the need for 4000 Raptor engines every year.

In a recent SpaceX staff presentation, SpaceX revealed they are just short of 500,000 Starlink customers. This means the production of Dish-terminals has increased from 5000 per week late in 2021 to 25000 per week or more.

It is these multiple ramps in mass production that will determine the revenue growth of SpaceX. SpaceX is not using 10% of the satellite network bandwidth capacity currently deployed. We know this because the 2400 satellites are in low earth orbit and only about 2% are over the USA at any one time. Five to ten times the land mass with customers is waiting for SpaceX to make more dishes and acquire non-US customers.

The critical bottleneck to revenue growth is faster mass production of satellite receiving dishes and terminals and the acquisition of new non-US customers.