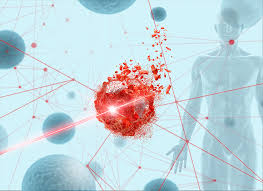 The key is a compound that glows under light to guide surgeons to the tumor, while near-infrared light activates a cancer-killing mechanism.

The new study builds on a common technique called Fluorescence Guided Surgery (FGS), which involves introducing a fluorescent agent to the body which glows under exposure to light. This is paired with a synthetic molecule that binds to a specific protein, such as those expressed by cancer cells. The end result is tumors that glow under certain lighting conditions or imaging, guiding surgeons to remove the affected cells more precisely.

For the new study, the researchers gave the technique an extra ability – killing the cancer as well. They added a new molecule that binds to a protein called EGFR, which is often mutated in cases of the brain cancer glioblastoma. After the fluorescence has helped surgeons remove the bulk of the tumor, they can shine near-infrared light on the site, which switches the compound into a tumor-killing mode by releasing reactive oxygen species. The idea is to kill off any remaining cells that could – and often do – stage an aggressive comeback after surgery.

In tests in mice with glioblastoma, the researchers showed that animals treated with the new technique had clear signs of tumor cell death in as little as one hour after exposure to near-infrared light. On top of that, the treatment also caused the animals' immune systems to mount a new attack on the cancer, which could help reduce the chances of relapse.