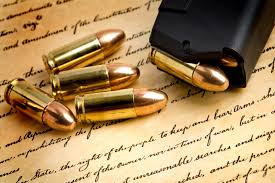 Host Margaret Brennan discussed with the Boston University professor the "freedom to enslave" was linked to the "freedom to have guns." There was no push back on that controversial claim or the underlying suggestion that gun ownership is largely a white impulse or practice.

Kendi is the director of the Center for Antiracist Research at Boston University. He has a history of controversial statements like his claim that Justice Amy Coney Barrett's adoption of two Haitian children raised the image of a "white colonizer" and she appears to use the children as little more than props. He has also declared that terms like "legal vote" are racist. He was recently in the news after explaining why he took a white doll away from this daughter to prevent her from breathing in "the 'smog' of white superiority."

However,  this is a historical and constitutional claim that should not go without some factual discussion or response.

The Two Gravest Threats To Our Liberties

Now gun bans could be based on your IDEOLOGY!