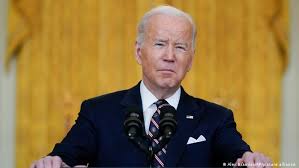 The money will be printed up without any collateral or "borrowed" and the American taxpayer will somehow have to bear the burden of this latest folly that is ipso facto driving much of the world into recession. And it will no doubt be blamed on Vladimir Putin, a process that is already well under way from president mumbles. But you have to wonder why no one has told Joe that the whole exercise in pushing much of the world towards a catastrophic war is a fool's errand. But then again, the clowns that the president has surrounded himself with might not be very big on speaking the truth even if they know what that means.

Having followed the Ukraine problem since the United States and its poodles refused to negotiate seriously with Vladimir Putin in the real world, I have had to wonder what is wrong with Washington. We have had the ignorant and impulsive Donald Trump supported by a cast of characters that included the mentally unstable Mike Pompeo and John Bolton followed by Biden with the usual bunch of Democratic Party rejects. By that I mean deep thinkers about social issues who would not be able to run a hot dog stand if that were what they were forced to do to make a living. But they are real good at shouting "freedom" and "democracy" whenever questioned concerning their motives.

Indeed, opinion polls suggest that there is a great deal of unrest among middle and working class Americans who see a reversion to Jimmy Carter era financial instability, at that time caused by the oil embargo. Well, there is a new energy embargo in place brought about by the Biden Administration's desire to wage proxy war to "weaken" Russia. Analysts predict that the costs for all forms of energy will double in the next several months and surging energy costs will impact the prices of other essentials, including food. Given all that, the fundamental issue plaguing both Democrats and Republicans is their inability to actually explain to the American people why the country's foreign and national security policy always seems to be on the boil, searching for enemies and also creating them when they do not exist, even when the results are damaging to the interests of actual Americans.