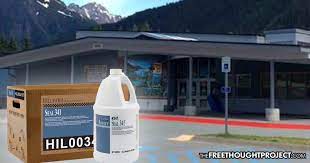 Obviously, this is not what parents want for their children. However, because of the rigid and bureaucratic nature of public education, it is exactly what they are getting.

Despite the fact that the United States spends more money on education than most countries in the world, American children rank abysmally low when compared to other countries who spend far less.

What's more, as other countries excel past American children in nearly every subject, while spending far less money, we've yet to see headlines from them, like the following: "Students accidentally served floor sealant instead of milk at school."

You read that right. Despite pouring billions and billions into the "education" system in America, school employees couldn't tell the difference between floor sealant and milk — and students were poisoned as a result.

As KSL reports, the blunder was a ticking time bomb; the floor sealant had been stored in the food warehouse for more than a year before it was given to children in cups.

Bill Barr goes after schools for hostility to Christianity