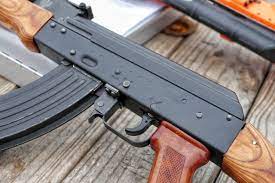 A teen and his grandfather were arrested at their Connecticut home for running a ghost gun operation where they would allegedly manufacture AR-15s in a makeshift shed out of their backyard.

Clayton Hobby, 18, and Kerry Schunk, 64, were taken into custody on Monday by East Hampton Police after a neighbor learnt of the pair's activity over the weekend, the New York Post reported.

Several ghost guns, including multiple AR-15s at 'various stages of assembly' and three polymer handguns, as well as 15 high capacity magazines, a bullet proof vest with local police badges on it and approximately 1,000 rounds of ammunition were seized by local authorities.

It was reported that one of the larger AR-15 rifles was converted to shoot fully automatic, just like a machine gun.

The pair were both charged in connection with the secret operation. Hobby was arrested on 23 counts of gun making and weapons possession. He is currently being held on a $250,000 bond, according to a press release from East Hampton Police.

Schunk was handed 22 conspiracy counts in relation to the illegal activity. He was also charged with interfering with an officer and was held on a $100,000 bond, the press release added.

In the US, they lack a commercially-applied serial number, which make them untraceable. On Monday, the guns found had fake serial numbers on them, the Middletown Press reported.

Overall, ghost guns are illegal in Connecticut but those that were manufactured before 2019 were ruled as an exception and require a serial number.