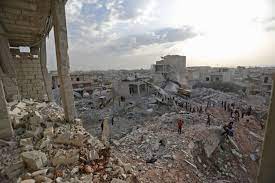 The Pentagon on Thursday released a declassified summary of an investigation into the 2019 bombing of 60 Syrian civilians.

The internal investigation into the March 2019 US airstrike in the Syrian city of Deir Ezzor concluded the US commander who authorized the strike was "not aware" civilians were within the blast radius.

Ultimately, the US military ruled the killings were "not a violation of the military's rules of engagement."

A 2021 report by the New York Times detailed the moment "an American F-15E attack jet" flew over a group of women and children and "dropped a 500-pound bomb on the crowd."

Following the first strike, two more 2,000-pound bombs were dropped on the site to eliminate any possible survivors.

The US military claimed the triple bombing was "necessary" in order to defeat 16 armed ISIS fighters in the area of the women and children.

Now, after the military investigated the incident, the Pentagon stated, "We're admitting that, yes, we killed some innocent civilians, women and children, in 2019 in Baghuz, Syria. It's all out there for you to see. We're admitting that we made those mistakes. That our operations ended up in the killing of innocent people."

Breaking News: The Pentagon found that the military's initial review of the deadly 2019 U.S. airstrike in Syria was mishandled at multiple levels of command and replete with reporting delays and information gaps. https://t.co/Lt2Whx8Dj5