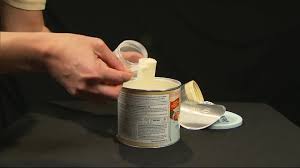 A Republican congresswoman took a trip to the US-Mexico border to expose the stockpiling of baby formula being sent to border facilities while American families continue to face empty shelves amid a nationwide shortage.

Rep. Kat Cammack, of Florida, was accused of lying about the formula crisis after she shared photos she was sent by sources last week showing full shelves of baby formula and food at a processing center at the southern border.

But now the congresswoman has visited and surveyed the facilities herself, finding not only an amass of formula, but other necessary infant supplies littered across the floor of a warehouse.

'Last week, I received text messages and photos from Border Patrol agents showing a stockpile of baby formula and there was complete outrage from the White House, CNN and other liberal outlets claiming that we were lying, so I decided to go down myself and film it,' she told Fox Business on Monday.

The GOP has criticized President Joe Biden's slow response to the formula crisis, which was caused by ongoing supply disruptions and exacerbated by a February safety recall at the nation's largest formula manufacturing plant.