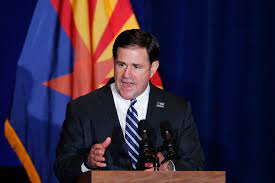 The Gateway Pundit reported that Texas has transported over 900 illegal aliens to Washington before the expulsion of President Trump's Title 42.

Governor Ducey took the action in advance of the Biden Administration's plan to end a pandemic-era policy known as Title 42. Title 42 allows the Border Patrol to turn away hundreds of thousands of migrants out of concern they may spread COVID.

A local non-profit near Yuma is the staging ground for the migrants. Two buses have left so far, including one Thursday. A total of 60 people so far from 12 countries. "With Arizona community resources under all-time demand, and little action or assistance from the federal government, individuals who entered Arizona seeking asylum have the opportunity to voluntarily be transported to Washington, D.C.," Governor Ducey said.

This is not a real solution to illegal immigration.

Bussing illegal aliens across the country is still destroying our country.

This is something the Biden regime has already been doing since stealing the 2020 Presidential Election.