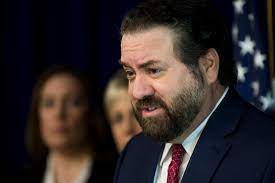 The Arizona Attorney General claims to be on the side of election integrity and even claims that he will prosecute individuals for 2020 election crimes. However, new documents show that AG Mark Brnovich almost indicted pro-Trump electors in Arizona.

Instead of investigating the horrific election crimes that took place on November 3rd to steal the 2020 Presidential Election, RINO Mark Brnovich colluded with the federal government and targeted Arizona patriots who knew their election was stolen.

The full forensic audit of Maricopa County's 2020 election discovered evidence of hundreds of thousands of fraudulent votes. After seven long months of "investigating" the fraud, Brnovich released a report acknowledging "problematic system-wide issues" and confirming that over 100,000 ballots did not have chain of custody documentation. However, Mark Brnovich has failed to act on any new prosecutions.

Brnovich clamors for Trump's endorsement and touts himself as a pro-Trump conservative. But explosive new documents prove his office actively considered prosecuting pro-Trump electors in the state who rightfully questioned the dubious official results of the presidential election of 2020.