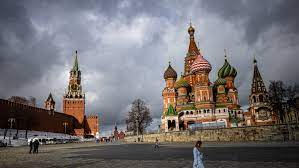 But seeing weakness in the Kremlin, it is hard for the West to restrain itself.  The West now dismisses Russian threats as bluster.  Consequently, the West has moved from provocation to aggression. With arms shipments and diplomatic support, the West has become a de facto combatant allied with Ukraine against Russia.

The Kremlin is now faced with a much enlarged frontier with NATO from the prospect of Finland, with its long border with Russia and nearness to St. Petersburg, joining NATO.  Finland is under no danger of Russian attack as matters stand, but will be if Finland joins NATO.  Joining NATO means Finland will be nuclear-targeted, which currently the country is not.  It is obvious that Finland's security deteriorates if Finland joins NATO.

The most obvious answer is that Washington has paid the Finish leaders to add to the pressure on the Kremlin by joining NATO.  I have good reason to believe this.  Years ago I was in the Pentagon in the office of a very high official being offered an important appointment.  I used the opportunity to ask a question about something that had long puzzled me.  How, I asked, does Washington manage to get foreign governments to support Washington's interests at the expense of their own countries? "Money," the high Pentagon official said.  "You mean foreign aid," I said.  "No," the official said, "we give the political leaders bags full of money.  We own them. They report to us."

Neither country is in danger of attack from Russia.  How many US dollars did it require for the leaders of these countries to decide to sell out their countries for filthy lucre?

Russia Humbles Experts Who Forgot the Economy Is Global