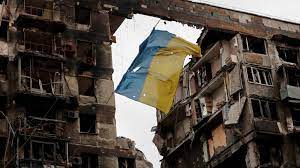 As of 6:17 PM EDT, a photo purported to be U.S. Navy Admiral Eric Olson, has been released allegedly showing the Admiral under arrest by Russian troops.

The photo, featured above, is claimed to be Admiral Eric T. Olsen.

His official US Military photo (Years old) appears on Wikipedia as shown below:

He previously served as Deputy Commander, U.S. Special Operations Command from 2003 to July 2007. Olson was the first Navy SEAL ever to be appointed to three-star and four-star flag rank, as well as the first naval officer to be USSOCOM's combatant commander.

He took command from Army General Bryan D. Brown in 2007.[1] Brown and Olson had served together at the SOCOM headquarters in Tampa for four years.

He retired from active duty on August 22, 2011 after over 38 years of service. He relinquished command of SOCOM to Admiral William H. McRaven the same day.