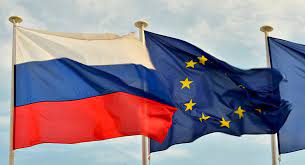 Which brings me to….

So the EU, already in the middle of the worst energy crisis since the Arab oil crisis and likely worse, is now pushing to eliminate imports of Russian coal. Just so you understand the importance of Russian coal to Europe…

Some 70% of Europe's thermal coal comes from Russia. Coal accounts for about 20% of continental Europe's electricity production (as of 2019; perhaps it is 25% now).

Watching the news is enough to drive a man to drink or to put his drink through the telly.

But fear not, there is a silver lining.

Sure, the Russians can take their coal and stick it where the sun doesn't shine! This works well for a populace now being riled up to the hysterical level, but the question remains: who are they going to find to replace that coal? Are the EU not aware that there is no spare capacity in the big coal exporting nations? Did no one tell the Europeans that coal is base load? Are they not aware they can't get anymore gas to offset any deficiency in coal? My goodness, when you look at this purely rationally, the only conclusion we can come to is that the energy crisis in Europe is very much in its infancy.

If you thought that there is an issue with respect to security of oil supplies, security over supplies of coal is a different dimension. Indonesia, Australia, and Russia accounted for some 75% of world coal trade in 2019.

BRICS+ and the Global South: Emerging Leaders of a Multipolar World? Pepe Escobar