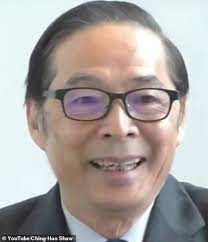 The man opened fire during a lunch reception at the Irvine Taiwanese Presbyterian Church in Laguna Woods, southern California, about 55 miles southeast of Los Angeles at 1.30pm on Sunday. A motive for the shooting has not yet been disclosed, but investigators don't believe the gunman, an Asian man in his 60s whose name was not immediately released, lives in the community.

Longtime congregant at Irvine Jerry Chen, 72 had just stepped into the kitchen of his church's fellowship hall when he heard the gunshots and saw church members screaming, running and ducking under tables.

Officials said the shooting ended after the gunman killed one man and wounded five senior citizens before worshippers hog-tied his legs with an electrical cord until deputies arrived. Four of the five people wounded suffered critical gunshot injuries.

Chen, who called emergency services from the church's parking lot, said he was in such a state of shock that he was unable to tell the operator his location. 'I had to ask someone else for the address,' he said.