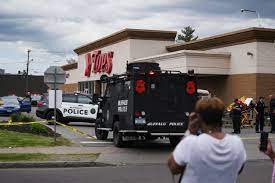 Let me make something VERY clear from the start…

The definition of a "False Flag" is NOT that the event didn't happen.

It's also NOT that the event wasn't tragic.

The definition is simply whether it was planned or staged in a way that would shift the narrative on a topic like gun control or divert from other issues in the news….or both!

So when we ask if something was a False Flag (i.e. the Gulf of Tonkin or 9/11 or a myriad of others) we're not saying it didn't occur and there aren't tragic deaths.

We just question if it was truly a man who just went crazy (allegedly) or whether it was more sinister than that.

And to that question I have to give FULL credit to Jordan Sather who did one of the best breakdowns on the topic I have ever seen.

I love his subheadline:

How many flags could the CIA false if the CIA could false flags?

Let me give you a portion of his analysis here in this article and then I encourage everyone to read his full report and follow him on his Substack here:

As the 'official story' goes – last night a man opened fire at a supermarket in Buffalo, New York while live-streaming on Twitch, killing at least 10 people and injuring several others. He also posted an online manifesto in which he described himself as a white supremacist.

Shooter could have been stopped in THREE MINUTES: