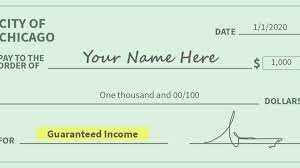 More than 90,000 Chicagoans applied to be part of the city's study that will test whether a universal basic income could reduce poverty in the city in the first 24 hours after applications opened, Mayor Lori Lightfoot said Wednesday.

Lightfoot said that makes it clear that the demand for help in Chicago will far exceed the city's capacity. "People in this city are hurting badly," Lightfoot said. "This is an emergency."

To be eligible for the cash assistance program, participants must live in Chicago, be older than 18, have experienced "hardship to due to COVID-19" and live in a household that earns no more than 250% of the federal poverty level, or $69,375 for a family of four, officials announced.

Of course it will.

Take 5,000 of the neediest people and give them $500 in free money every month for a year, and of course their lives will be better.

The money isn't free. It comes from taxpayers.

The programs do not scale and never will.