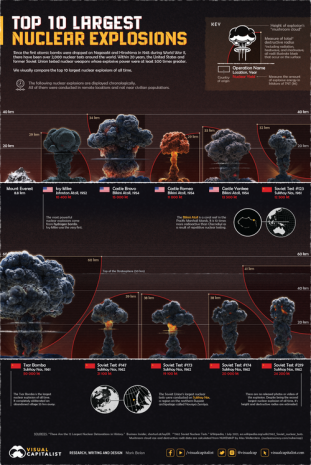 The U.S.' Trinity test in 1945, the first-ever nuclear detonation, released around 19 kilotons of explosive energy. The explosion instantly vaporized the tower it stood on and turned the surrounding sand into green glass, before sending a powerful heatwave across the desert.

As the Cold War escalated in the years after WWII, the U.S. and the Soviet Union tested bombs that were at least 500 times greater in explosive power. In the infographic below, Visual Capitalist's Mark Belan and Govind Bhutada compare the 10 largest nuclear explosions in history.

The Anatomy of a Nuclear Explosion

After exploding, nuclear bombs create giant fireballs that generate a blinding flash and a searing heatwave. The fireball engulfs the surrounding air, getting larger as it rises like a hot air balloon.

As the fireball and heated air rise, they are flattened by cooler, denser air high up in the atmosphere, creating the mushroom "cap" structure. At the base of the cloud, the fireball causes physical destruction by sending a shockwave moving outwards at thousands of miles an hour.