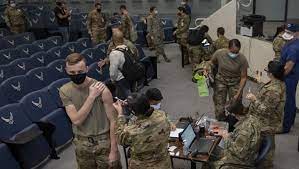 Lt. Col. Peter Chambers has a 38-year career in the military. He is a Green Beret Commander having served in the Special Forces, and he is a military doctor, serving as a flight surgeon and combat medic. He has earned the Purple Heart and Bronze Star Medal, as well as other military awards for his service.

He began to research vaccine injuries following the COVID-19 vaccines that were mandated for service members, in the Defense Medical Epidemiology Database (DMED) sponsored by the DOD.

He has most recently been deployed in Texas, near the Texas-Mexico border as a task force surgeon, where he began to provide "informed consent" counseling to over 3000 soldiers at the border regarding the COVID-19 vaccines, sharing with them the data he had uncovered in DMED, VAERS, NIH and other government sources.

Being in Texas, he also informed them that doctors could prescribe early treatments for COVID, such as Ivermectin, which are very effective in overcoming the symptoms associated with COVID-19.

As a result, only 6 service members out of 3000 decided to comply with the COVID-19 vaccine mandates.