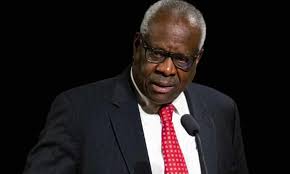 Thomas, 73, said at a conference that the leak would weaken the public's trust in the Supreme Court as an institution, calling the unauthorized disclosure of deliberations 'tremendously bad.'

In his remarks, the conservative justice, who has long called for overturning Roe, hinted that a liberal clerk may have leaked Alito's draft opinion, and lamented that partisan rancor has grown more entrenched on the high court.

Thomas pondered: 'I wonder how long we're going to have these institutions at the rate we're undermining them, and then I wonder when they're gone or destabilized what we will have as a country and I don't think the prospects are good if we continue to lose them.'

He continued: 'When you lose that trust, especially in the institution that I'm in, it changes the institution fundamentally. You begin to look over your shoulder. It's like kind of an infidelity – that you can explain it but you can't undo it,' reports Politico.

Thomas, a nominee of President George H.W. Bush, said it was beyond 'anyone's imagination' before the May 2 leak of the opinion that even a line of a draft opinion would be released in advance, much less an entire draft that runs nearly 100 pages.

Thomas was speaking at the Old Parkland Conference, a meeting of black conservatives, in Dallas where he was Friday's keynote speaker.

Following his speech, Thomas sat for a questions and answers session with John Yoo of Berkeley Law School.

THIS IS TOLERANCE? Christian crisis pregnancy center in Colorado vandalized, set on fire over...