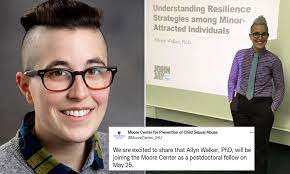 The trans Old Dominion professor who was forced to resign after they defended pedophiles by saying society should refer to them as 'Minor Attracted Persons' has been hired by Johns Hopkins University.

Allyn Walker, 34, will start work as a postdoctoral fellow for the Baltimore school on May 24 - at a center aimed at preventing child sexual abuse - according to the college.

The center, created in 2012, describes itself on its website as 'a research center that  creates, through rigorous science, a public health approach to preventing child sexual abuse.'

Walker, who uses they/them pronouns, was forced out of Virginia's Old Dominion University last November, after more than 15,000 outraged onlookers signed a petition to have them removed for the contentious remarks made by the professor that were expanded on in the 2021 book 'Long Dark Shadow: Minor Attracted People.'

In the book, Walker attempts to destigmatize pedophilia and encourages people to refer to them as 'Minor Attracted People,' asserting they should not be ostracized for their urges - which Walker says cannot be helped.

Other contentious claims made by the professor - who possesses a doctorate in criminal justice - in the book include suggestions that pedophiles should also be provided with child-like sex dolls to satisfy their urges, and that the sex crime was not 'immoral.'

Seriously - Here's How Things Got To This Point