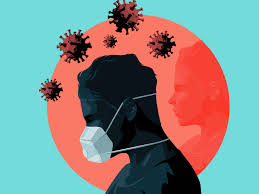 The survey was conducted by Pew Research between April 25-May 1.

In comparison, 70 per cent of Americans said inflation was a "very big problem," with a further 23 per cent describing it as a "moderately big problem."

Ten other issues, including violent crime, illegal immigration and the condition of infrastructure, all rank above COVID-19 in terms of being more of a concern.

As one commentator observed, the war in Ukraine appears nowhere on the list, although Pew chose not to include it as an option.

Despite the pandemic virtually being over, numerous states are still enforcing indoor mask mandates and other COVID restrictions that refuse to die.

As we highlighted yesterday, Broadway star Patti LuPone launched an angry rant at an audience member for not wearing a mask properly during a Q&A session despite the fact that she wasn't wearing one inside the theater.

How the fall of human civilization was pulled off?

The WHO Pandemic Treaty - What It Really Means...

This pandemic treaty is the greatest power grab any of us has seen in our lifetime, says Neil Oliver

If You've Had COVID, Please Don't Get Vaccinated with Mercola