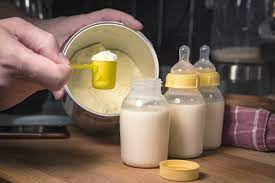 As Christina Szalinski reported in the New York Times, "baby formula is one of the most tightly regulated food products in the US."

As many know, the US is confronting a shortage in baby formula that has grown quite serious. What started as complaints on Twitter of "out of stock" messages on Amazon purchases has turned into a national panic.

CBS News reports that at retailers across the country, some 40 percent of the top-selling baby formula products were out of stock as of late April, according to an analysis from Datasembly.

"This is a shocking number that you don't see for other categories," Ben Reich, CEO of Datasembly, told the news network.

The story got enough traction to finally get the attention of the White House.

On Monday, Press Secretary Jen Psaki said the government is doing its best to address the shortage, noting that manufacturers say they're producing at full capacity following a product recall by the Food and Drug Administration (FDA).

"Ensuring the availability is also a priority for the FDA and they're working around the clock to address any possible shortage," Psaki said.

Psaki is not wrong that the product recall has made the baby formula shortage worse.

As Eric Boehm pointed out at Reason, part of the shortage stems from a suspected bacterial outbreak at an Abbott plant in Michigan, which prompted the recall of three major brands of powdered formula. Matters were made worse when the plant was subsequently shut down for FDA inspection.

EXPOSED: BABY FORMULA CRISIS Is Only The BEGINNING!...

Preparing for an entire collapse of the system or if I am not allowed in their new system.

We Found All the Baby Formula . . . Biden Admin Sent it all to Southern Border...

How Did We End Up Having a Baby Formula Shortage?