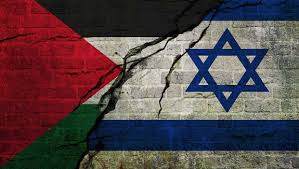 "As her coffin reached the Qalandia crossing between Ramallah and Jerusalem, clashes broke out between Palestinians and Israeli troops, Channel 13 News reported," according to The Times of Israel. "No injuries or arrests were reported. In footage broadcast by Al Jazeera, some masked Palestinians could be seen raising assault weapons and firing in the air."

The video shows Israeli soldiers pushing back and beating Palestinians. Gunfire can be heard, though it's unclear who fired the shots. Those carrying the casket can be seen temporarily losing control of it.

Akleh was shot and killed on Wednesday while covering clashes between the Israeli Defense Forces and Palestinian gunmen at the Jenin refugee camp in the West Bank. Al Jazeera Media Network condemned Akleh's death and blamed Israel though it remains unclear who shot her.

Palestinian Authority President Mahmoud Abbas said Israel is "completely responsible" for Akleh's death, while Israel has said it is investigating the matter and has sought Palestinian cooperation, only to be rebuffed.

"Our forces from the IDF returned fire as accurately, carefully, and responsibly as possible. Sadly, Al Jazeera journalist Shireen Abu Akleh was killed in the exchange," said Israeli Prime Minister Naftali Bennett. "To uncover the truth, there must be a real investigation, and the Palestinians are currently preventing that. Without a serious investigation, we will not reach the truth."