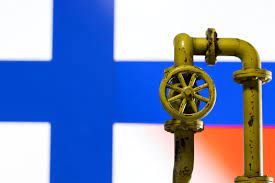 Prior to this warning, the local media outlet noted expectations that Finland would be cut off from Russian gas after May 23rd, when its next contract payment with Gazprom comes due and the country refuses to pay in rubles. In late April, Russia cut off gas supplies to Poland and Bulgaria for refusing to pay in accordance with the Kremlin's ruble scheme.

Speaking to Iltalehti on Thursday, Finnish Defense Minister Antti Kaikkonen said he could not confirm the warning.

Parliamentary group chairman Ville Tavio told Iltalehti that working groups had been informed of "various scenarios of Russia's retaliation", noting that preparations have already been made.

Between 60% and 70% of Finland's natural gas comes from Russia, though the country's main sources of energy are oil, biomass and nuclear power, with natural gas representing only 5% of the total consumption. According to the Finnish government, renewable energy surpassed fossil fuels and peat in total energy consumption in 2020, leaving the country less dependent on Russian energy sources.

Algae energy harvester powers electronics for a year on its own

LiPower Solar portable battery box...Not my favorite...What to look for in a power box.

Welcome To The Greatest Energy Crisis In History

First ammonia-powered jet flight in 2023: A roadmap to clean aviation

Switch to Renewables Could Lead to Blackouts According to U.S. Grid Operators

How to Build a Low-tech Solar Panel?