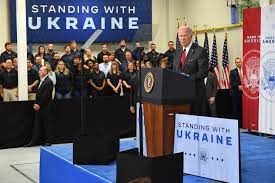 The latest such dispatch, pursuant to an initial $3.5 billion fund authorized by Congress early on, was announced on Friday; "Biden says U.S. will send $1.3 billion in additional military and economic support to Ukraine," read the CNBC headline.

This was preceded by a series of new lavish spending packages for the war, unveiled every two to three weeks, starting on the third day of the war:

Those amounts by themselves are in excess of $3 billion; by the end of April, the total U.S. expenditure on the war in Ukraine was close to $14 billion, drawn from the additional $13.5 billion Congress authorized in mid-March. While some of that is earmarked for economic and humanitarian assistance for Ukraine, most of it will go into the coffers of the weapons industry — including Raytheon, on whose Board of Directors the current Secretary of Defense, Lloyd Austin, sat immediately before being chosen by Biden to run the Pentagon. As CNN put it: "about $6.5 billion, roughly half of the aid package, will go to the US Department of Defense so it can deploy troops to the region and send defense equipment to Ukraine."