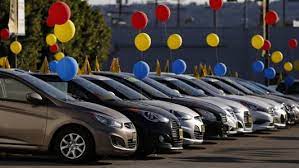 After jumping 90%, since the start of the virus pandemic, used car prices are cooling as buyers balk due to affordability issues stemming from soaring interest rates.

Outside of the COVID shock and Great Financial Crisis of 2008/09, the Manheim Used Vehicle Value Index, a wholesale tracker of used car prices, printed the most significant monthly decline in terms of rate of change averaged out over three months in April at 6.4%. It didn't beat the April 2020 print of -11.2% nor December 2008 of -11.5%, but those two periods were in full-blown financial crises.

Currently, the Federal Reserve and the Biden administration reassure everyone the economy is strong, and there's nothing to worry about. The Fed routinely says monetary tightening will create a soft-landing, similar to the mid-90s. However, tightening financial conditions could only spark trouble for an economy based 70% on consumption and driven by access to cheap credit.

The cooling in the used car market could suggest a broader economic slowdown is ahead.

The rate surge was evident in April as used car sales slowed down precipitously, down 13% compared with March.

Readers may recall the first used car price stall warning printed in early February. In a piece titled "Used Car Prices Arrive At Yet Another Major Inflection Point," it was evident that the loss in momentum in used car prices was a grave concern. By mid-March, used car prices slid some more as supply chain congestion peaked and was believed to soon increase the supply of new cars. Then by early April, used car prices continued to slump as we asked the question: "Are Used Car Prices About To Peak For Real This Time?"