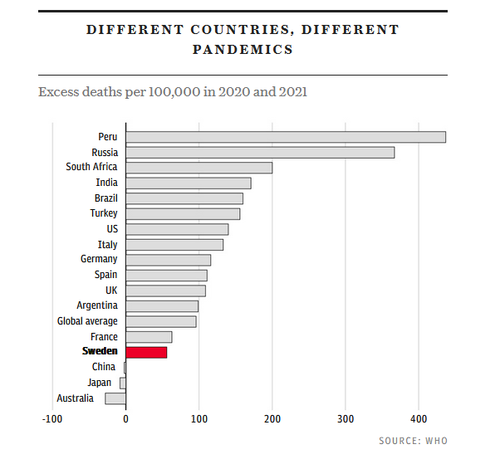 Sweden, which was criticised in the early stages of the pandemic for resisting a mandatory lockdown, had fewer deaths per capita than much of Europe.

As the Telegraph delicately notes - "Experts said the difference demonstrated stringent lockdowns alone did not determine success when battling Covid-19."

The Telegraph suggests that things such as lower obesity and better general health played a factor - which is certainly true.

"The lesson from Sweden is to invest in your population's health and have less inequality," said Prof Devi Sridhar, the chairman of global public health at the University of Edinburgh.

Meanwhile in the strictly locked-down UK, "there have been too many preventable deaths," according to Dr Michael Head, a senior research fellow in global health at the University of Southampton. "By the end of the pandemic, it's likely that the UK will probably end up mid-table on various metrics that measure pandemic performance, such as excess mortality," he added.

In fact, some 68% of deaths during the pandemic came from just 10 countries, including the United States, Russia and India.

Money grabbers: US hospitals are not complying with cost transparency rules;