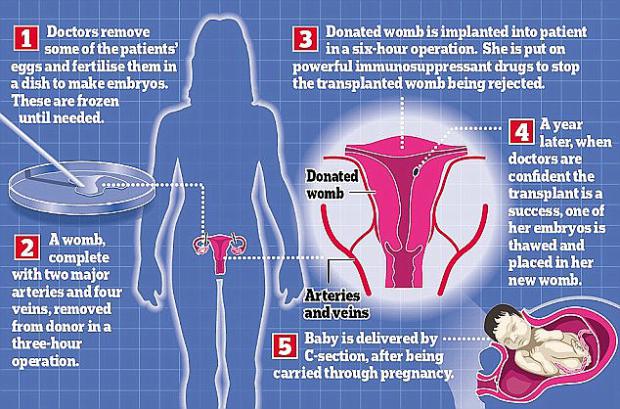 The risky procedure will involve taking the reproductive organs from a dead donor or a patient who has transitioned the other way and had theirs removed.

There has only been one documented case of a womb being inserted into a trans woman in the past — but she died from complications just months later.

Impregnating a trans woman would be an even bigger feat, and would require the use of IVF and a C-section, because they do not have a fully functioning vagina.

Dr Narendra Kaushik, who runs a gender reassignment clinic in New Delhi, has said he is 'very, very optimistic' he can make a success of the procedure.

'Every transgender woman wants to be as female as possible — and that includes being a mother,' he is quoted as saying in The Mirror.

'The way towards this is with a uterine transplant, the same as a kidney or any other transplant. This is the future. We cannot predict exactly when this will happen but it will happen very soon.'

The surgeon has not revealed the recipient or given a timetable for the surgery, but he added: 'We have our plans and we are very very optimistic about this.'

Money grabbers: US hospitals are not complying with cost transparency rules;