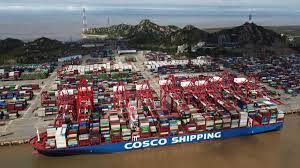 COVID lockdowns in China have wreaked havoc at Shanghai, the world's biggest container port, and are now causing problems at other major ports around the world.

Some Chinese cities, including Shanghai, have started easing COVID restrictions in recent days, but experts say that the damage has already been done, and global shipping will suffer well into the summer. That could exert even more pressure on global supply chains already reeling from Russia's invasion of Ukraine, and keep inflation running hot.

Data from Project44, which tracks global supply chains, showed that shipment delays between China and major U.S. and European ports have quadrupled since late March, when China shut down the city of Shanghai, which has the world's busiest container port.

By the end of April, ships from China to Seattle were taking four days longer than expected to arrive, up from about one day the previous month.